The Kotohira Maritime Museum has introduced English text guides display for our guests to enjoy the museum even more.
When you scan the 2D barcode on the display with the number (marked) with your smartphone, the explanation page of the display appears.
Please try and see. 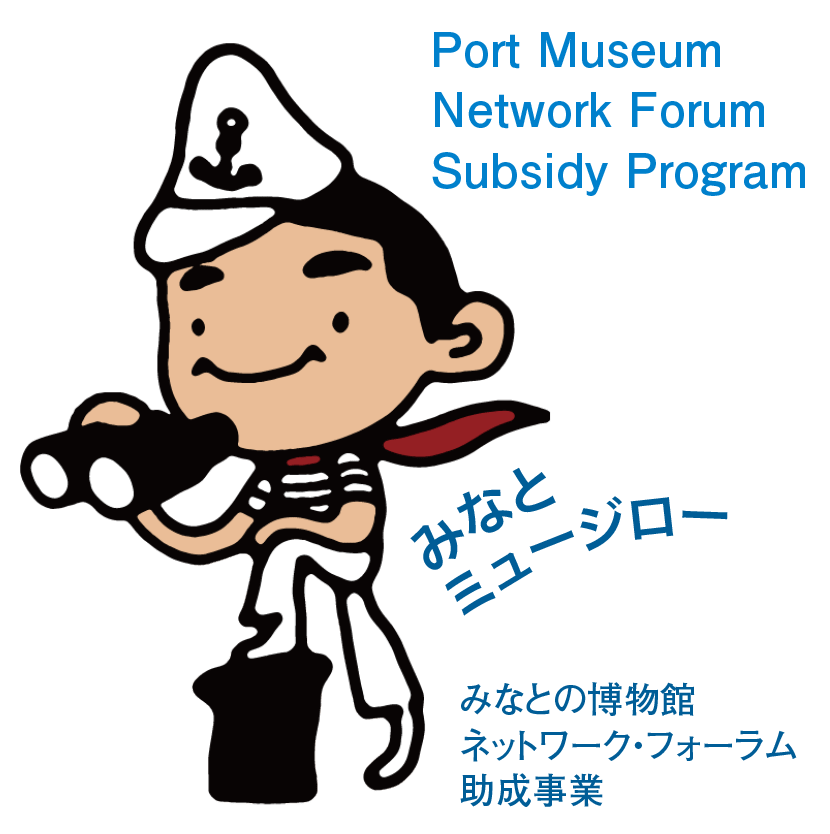 The service is only applicable to the displays with this number (marked). 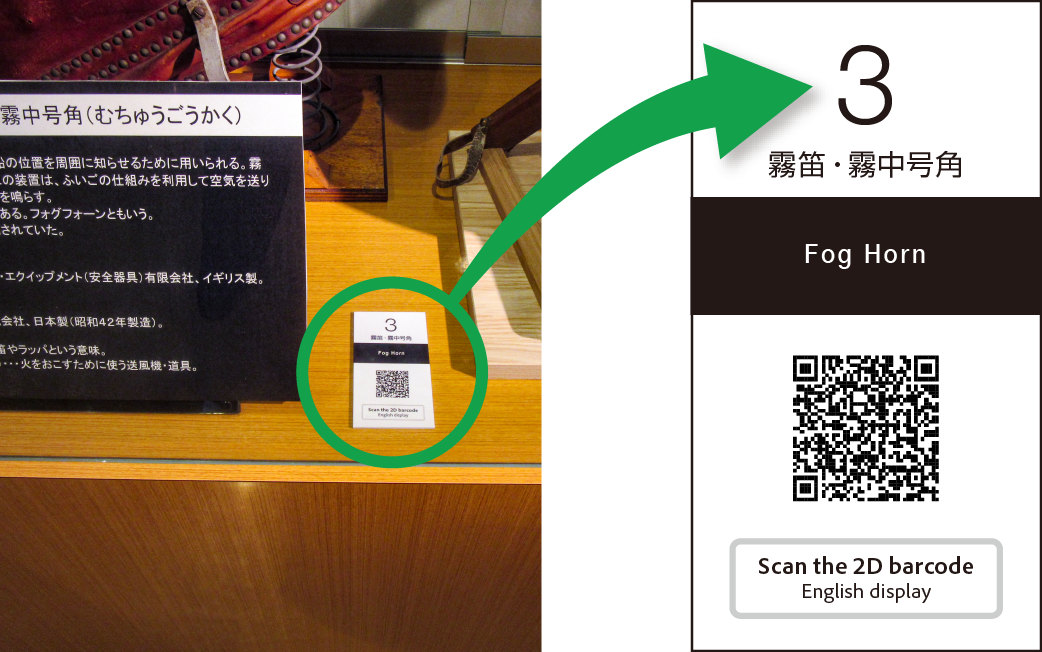 Scan the 2D barcode beside the exhibit. The page on the English website describing the exhibit is opened. 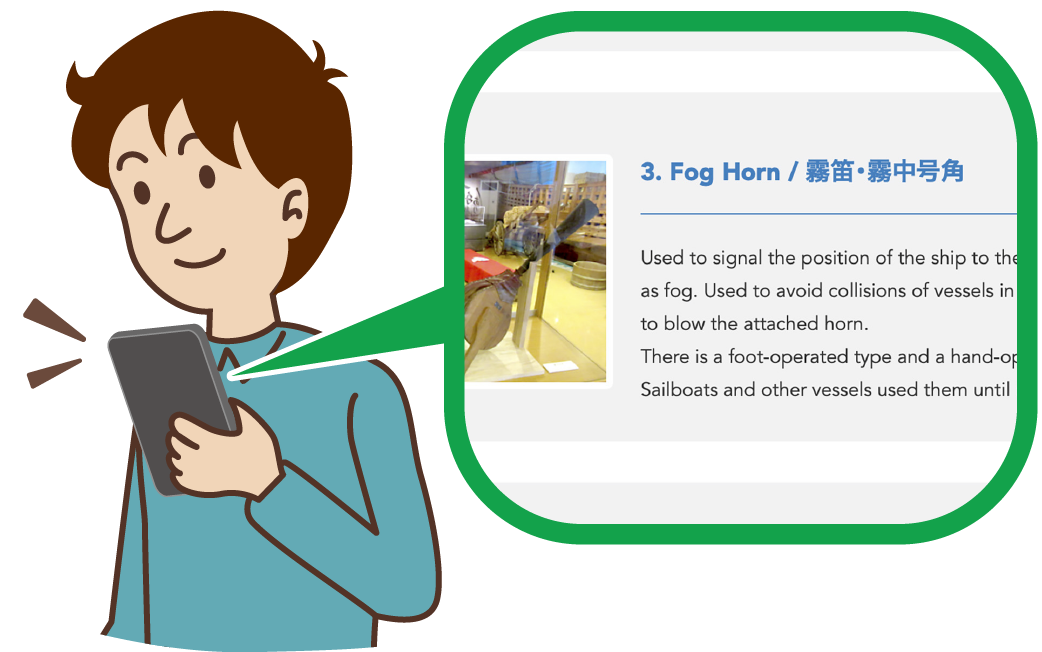 This page introduces some of the exhibits at the Kotohira Maritime Museum. 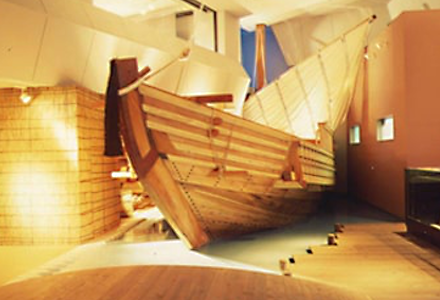 “Konpirasan” is a guardian deity who ensures the safety of vessels atop the sea.
The god has been an important guardian deity for seafarers since ancient times.
During the Edo period pilgrimage of “Konpira-Mairi” was prevalent among ordinary people.
Konpira-ships operating from Osaka to Shikoku (primarily serving the ports at Marugame and Tadotsu) ferried pilgrims to their destination.
When people come, goods are brought in, and markets are built.
On the docks, freshly arriving pilgrims and those on their journeys home, as well as merchants and sailors all bustled about and mingled with one another. 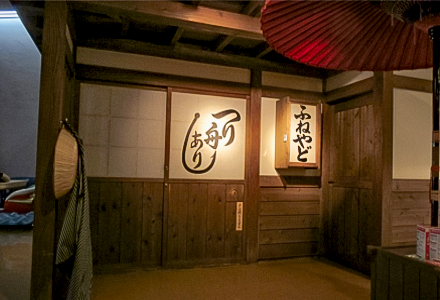 In the Edo period, there was an inn for sailors called “Funa-yado” at the port towns.

They served meals and resting area. They also acted as go-between merchants for shippers and boatmen as well as wholesalers, buying cargo from them, selling to them, and providing ships with necessities.
In addition, some of the boathouses owned the boat to rent out for fishing and leisure. Used to signal the position of the ship to the area under low-visibility conditions, such as fog. Used to avoid collisions of vessels in the fog. This bellows-type device uses air to blow the attached horn.
There is a foot-operated type and a hand-operated type. Also called fog signals.
Sailboats and other vessels used them until recently. 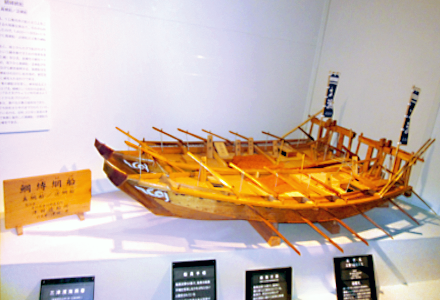 The sea bream net fishing is a large-scale fishing method in which a fleet is formed with about 60 people per fleet and carried out. The 2 boats that played a main role were the Ma Ami Bune and the Saka Ami Bune, which haul nets as large as 1,400 to 1,500 meters. 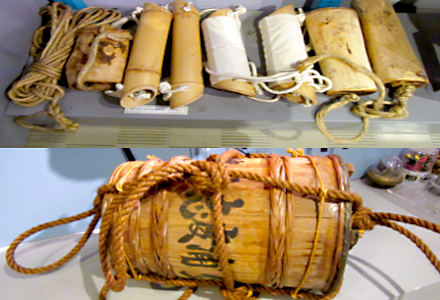 The barrels were filled with drinking water when the ship left port. When they are empty, they became as flotation device by closing the lid tightly. Miso and soy sauce barrels were also used for the same purpose.

The float buoys made of paulownia or bamboo were tools for drifting. In an emergency, they were held under arms and secured onto a body by strings to float. The Kanrin-Maru is a warship that the Tokugawa shogunate ordered from the Dutch government to build the navy. The wooden steamship, which arrived in Nagasaki in 1857, had 3 masts and was equipped with 12 cannons.

The ship played an active role as a training ship of the Nagasaki Naval Training Center of the shogunate, and succeeded in crossing the Pacific for the first time when a Japanese delegation was dispatched to the United States to exchange the instruments of ratification for the Treaty of Amity and Commerce between the United States and Japan in 1860, accompanying the U.S. warship Portahan. At that time, Kaishu Katsu, Yukichi Fukuzawa and John Manjiro were on board. Of the 50 sailors on board, 35 were from the Shiwaku Islands.

※Shiwaku Islands are the 28 islands of various sizes, located in Nishibisan Seto Inland Sea between Kagawa Prefecture and Okayama Prefecture. Nippon-Maru is a sister ship to Kaio-Maru, which was built in 1930.

It was a training ship for students of commercial vessels who aim to become sailors. It sailed about twice a year and carried approximately 120 trainees.

A new ship was built in 1984, ending its half-century mission. 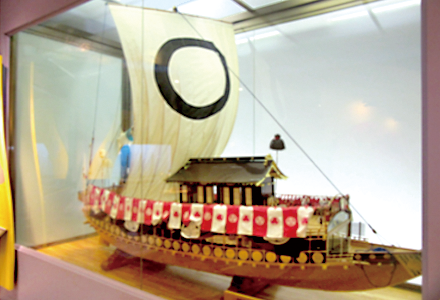 Gozabune (Officer’s Ship) is a boat used by Saigoku Daimyo (Japanese feudal lords) for Sankin-kotai (alternate attendance). It was a warship in the Warring States Period, but feudal lords gradually began to compete for its gorgeousness in the Edo Period, the era of social stability. The Hiryumaru of Takamatsu Clan was a typical Gozabune and the largest ship that was permitted to be built at that time. Funa-dansu was a safe-deposit box used by boatmen and sailors on the Bezaisen (merchant ship) which played a major role in the maritime shipping business from Edo to Meiji period. It was used to keep valuables such as money, ledgers and bills of passage and signature stamp.

The chest was made tough to prevent damage by using Japanese zelkova with layers of lacquer and heavy metal fixtures for exterior. For the interior of the chest, paulownia is used as a material which floats on the water and also prevents water entry. In addition, there were hidden boxes inside to prevent theft, the intricate craftsmanship served as a key for those boxes. Bezaisen was a typical wooden Japanese ship that was mainly active in the Seto Inland Sea from the Edo Period to the early Meiji Period and engaged in the marine transportation of goods.

Bezaisen sailed with a square sail in the center of the hull and an auxiliary sail, and was able to maneuver the sail freely and sail against the wind.

As the building of lager ships progressed, ships with a capacity of 1,000 koku became more common, and larger Bezaisen came to be called Sengoku Bune. This was a year after Amundsen reached Antarctica. 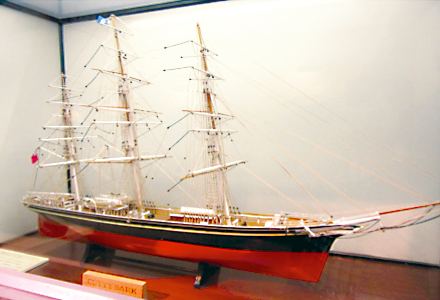 Cutty Sark was built in 1869 at Scott & Linton’s shipyard in Dumbarton, England and commissioned to transport seasonal new tea leaves from China to England every year.

From the 1850s, competition for the transport of the first tea of the season (tea race) became fierce, and it later developed into a sailing ship (tea clipper) for races with a reward.

Cutty Sark played a significant role as a tea clipper, however, as she was built right after the Suez Canal was completed, her heyday was not long.

Now, Cutty Sark is the only remaining tea clipper on exhibit at Greenwich near London. 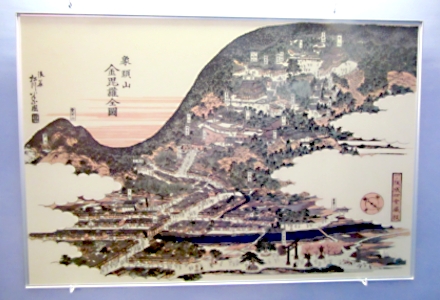 This is the landscape of Konpirasan as seen in the Late Edo Period.
The Konpira Ooshibai Theater (now Kanamaru-za Theater) had been built, and the Kondo Main Hall (now Asahi-no-yashiro Shrine) was already completed, but the kairo semi-enclosed corridor in front of the Kondo is not portrayed, and it can be thought that this piece was painted sometime between 1848 and 1860.

※Replica
Artist: Hanzan Matsukawa (松川半山)
Matsukawa was the foremost ukiyo-e woodblock print artist of the Early Meiji Period, and a painter from the Late Edo Period into the Meiji Period. The representative folk song of Kagawa.
It is also famous as “Ozasiki-Uta” where geisha sing.
It is said this song was sung to pilgrims visiting the red-light districts of towns such as Kotohira, as well as in the lodgings in the vicinity of the Port of Osaka. However, it was also sung en route to the shrine, and the details of its origin are unknown.
It is said that it became popular among pilgrims to Konpira, who spread it throughout the country. 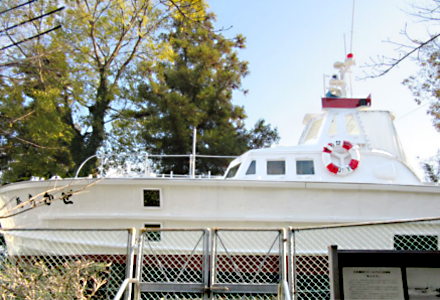 The Arakaze was built as an all-aluminum alloy ship, which was rare in the world at that time. The ship served for more than four and a half centuries and is a memorable ship that completed its mission without any accidents.

Since its completion in March 1954, it was active in the Kitakyushu area for 20 years as a patrol boat of the Japan Coast Guard. After that, the ship was used as a training boat for the Maritime Disaster Prevention Center. The ship finished the last duty 27 years after it went into service in January 1981.

Due to the long and severe use, the hull is partially deformed.These were caused when attatching the side of vessel to another vessel or quay.  However, there is no damage or corrosion, and the strength test of the samples cut out from the hull has confirmed that there is no deterioration of materials.